Dealers travel around the planets to trade rare products and have one important policy in business: Buy anything cheap and sell it at a high price. They are also very good at crafting items and selling those goods to make a profit. Danger cannot be avoided when traveling in the world of ROSE, so the Dealers know how to protect themselves from threats. 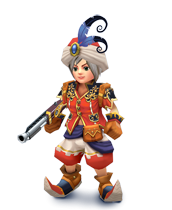 Honest Dealers that want to specialize in business and trading can be promoted to the Bourgeois. As Bourgeois, their trading skills are enhanced and are also able to hire mercenaries. Bourgeois characters use their financial abilities to gain control and influence over their opponents and to make sure their allies are well supplied.

Because Bourgeois must travel from town to town for business, they wear lightweight, yet luxurious clothing that emphasizes their wealth. They can carry an extra pair of shoes for long trips, and carry around huge bags on their backs for business.

Bourgeois specializes in the use of trading skills, and hire mercenaries to fight for them.

Dealers that wish to further develop their craftsmanship can be promoted to Artisans. As Artisans, they create rare items by learning various crafting skills. They also create potions and items for themselves and others to aid in battles.

Artisans prefer dark clothing, as well as a broad brimmed hat to block the glare of the sun when they travel. They also carry backpacks which allow them to gather many crafting materials. Around their waists, they often carry a water bottle and simple tools for item crafting.

Artisans are adept at handling Guns.

Artisans are not well suited to solo battles, but have very strong ability to create weapons and armor that are suited for battle. They also aid with potions and grenades in parties.

Artisans have various item creation skills which allow them to create weapons, armor, potions, or gemstones. They have a few offensive skills for when there is no choice but to fight an enemy.