With formidable attack strength and physical endurance, Soldiers protect their comrades from enemies and eliminate evil monsters. Although they cannot use magic, they can use almost every type of weapon to inflict more damage onto enemies in battles. 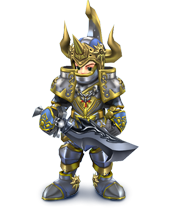 Soldiers can advance to Knights imbued with holy power. Knights always lead the forces at the front line with their excellent defense, and can withstand attacks from stronger enemies.

Knights can equip heavy armor, such as plate armor, and large shields offering protection to most of the body. They also wear head gear like full helms which cover most of the face.

Knights favor the use of a One Handed Weapon and a Shield at the same time. Although their attack strength may not be great, their strikes are fast and accurate. Knights that want to specialize in ranged attacks can equip Crossbows.

Since Knights possess decent physical strength and high defense, it is possible to deal with stronger enemies when supported with magic skills that amplify their abilities. When in a party, Knights can lead the battle and directly confront the enemy as the first line of defense. They are not only efficient in protecting party members, but they also cast some support magic skills to aid party members from a distance.

Knights tend to specialize in the use of One Handed Swords for their speed and accuracy. They also use Shields to block enemy attack and have support skills that increase the defense of the caster or party members, as well as other enhancements. Against weaker enemies a Crossbow Weapon is preferred to increase damage. 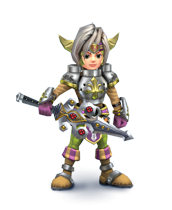 Soldiers may advance to Champions through ceaseless self-training in the art of offensive combat. Champions face many foes at a time with their powerful attack strength.

Champions usually equip lightweight armor made out of titanium or other high refined metals. They may also equip Backshields when fighting against a stronger enemy.

Champions generally use heavy weapons such as Two-Handed Axes, Two-Handed Swords or Spears.

Champions are ideal for fighting a large number of foes at one time with their powerful attack strength. However, since they are not as defensive as the Knight class, it may be difficult for them to battle stronger enemies. In a party, a Champion can support a Knight by damaging enemies while the Knight defends the Champion from attacks.

Champions specialize in skills which increase attack strength and inflict great damage, but they also have access to abilities that can increase their attack accuracy and stun their enemies.